Sounds of the City: York 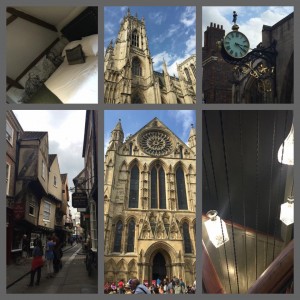 This week I made the trip up to York to catch up with Chris Helme and hang out at his open mic night, Ruby Tuesdays. Not a bad way to spend a couple of days mid-week in summer but made even better by receiving some good news for my authoring alter ego Riley Reynolds and then finding York to be not only pretty but absolutely bursting with music.

I’ve been to York a few times – as a child on day trips to the Minster; on a weekend away with my now-husband; for at least one unconference (pregnant, I spent a lot of time sat down on the bullet train between sessions); and as a parent of a primary school-age child about to study Vikings. But I’ve not really just wandered around and listened to the city, with no other purpose than doing just that.

There are a lot of buskers in York. Getting lost between the Shambles and the Minster there were snippets of beautiful street music – a fiddle player, a girl with an acoustic guitar, a man surrounded by percussion against the wall of a church, Amazing Grace on a small keyboard. Mixed with the bustle that is somehow created by many ambling tourists it was the perfect soundscape for peering in shop windows and shading eyes against sunshine to look up at the intricacies carved in old stone.

Ruby Tuesdays turned this musical city up to 11 for me though. (And yes, doing work with Chris means I’m unlikely to be negative about it BUT I genuinely loved it so much that I had to write something…accusations of bias be damned!) 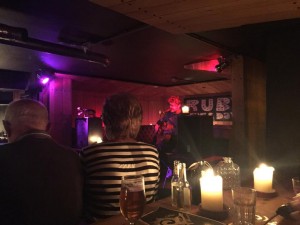 In a basement off a little side street is the candle-light and ruby glow of York’s only Tuesday night open-mic. It becomes packed with people, the soul and funk records cosying around us from the low ceiling and wood-panneled walls. It has a beautiful energy that comes from the pleasure of sharing the playing and making of music.

There are a lot of performers tonight – mostly acoustic but all very different, and all of who I would have paid money to hear (especially the quiet ones, late on, who competed with the chatter in the room). There is euphoria in the air, dancing and whooping as the records spin.

Magic is conjured here – music, conversation and a love of the way it all comes together in this place.

The spell has lasted long beyond leaving York, filling my head with music and sunshine for the rest of the working week. Now I’m already looking forward to a return trip at the end of the summer to listen again to this lovely city and bask in the glow of a Ruby Tuesday.

You can find Ruby Tuesdays on Twitter and Facebook. Or, even better, find it in the real world at Sotano on Stonegate every Tuesday from 9pm until really very late.

You can find Chris Helme on his website, on Twitter and also on Facebook. Or, even better, you can hear him in real life at one of his gigs (loads coming up) or spinning records at Ruby Tuesdays.

For more on things to do in York then the York Mix looks like a good place to start and were very lovely to speak to as well.

Find us on social media and get in touch: