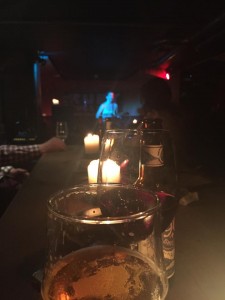 We’re working with Chris Helme on digital PR for his own music (or we will be soon at least) but last night Noble and Wild headed back to York to deliver a small gift to the open mic night he runs and we <3 big time. Once again the night and York’s musicians, and scene, surprised and delighted us.

The herald of autumn is a chill in the air. The jacket gets pulled closer as a shiver runs through you.  Tendrils of music and laughter, the promise of all kinds of warmth, reach up to the street and you find yourself at the top of a stair case flickering with candlelight, drawn down into Sotano.

You don’t know it yet but tonight the basement bar is going to become a hands-aloft rave, a trip hop haven, a softly sung acoustic dream. Even when you enter alone as a stranger you will leave feeling as if you’ve been there always.

For tonight is Ruby Tuesdays (with guest host Robert Loxley Hughes rather than your regular Chris Helme).

The poster says it is an open mic and this is true, but it isn’t the whole of it. What you don’t know until you’ve made your way down those stairs into the colour of the sound is that Ruby Tuesdays is magic.

It is the land at the top of the Faraway Tree – an ever-changing space shaped by the atmosphere conjured by who turns up to play, the way their vibes start to ripple back and forth. It can be an underground ‘60s soul club, or a warehouse party, or a psych-fuelled trip, a quietly nodding folk club. It can be one of them at a time or all of them at once.

Tonight peppercorns are floating in the glass in front of me, little black spheres slowly spinning through a universe of pink gin and crushed ice. Candlelight flickers as I catch glimpses of the stage between the shifting silhouettes of the crowd. I’m watching as a didgeridoo is set up, a drummer shuffling in readiness beside it. If I’d known what was about to happen I would have braced myself, but the surprise is part of the magic down here.

The volume is not something you hear, it’s something you feel, inside. And the longer it goes on the more you are pulled into its bass rhythms, a euphoria spreading through the small crowd still packing out the bar, we whoop and holler at the end only to realise it’s not a stop but a drop and we’re about to be taken under with some loose and funky beats. 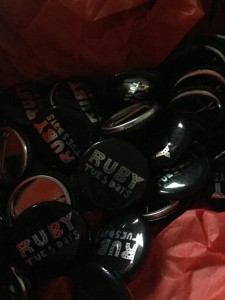 Open mic? It doesn’t even come close to describing what this is. No doubt, this is magic.

As is the trip hop and psych rock infused jam that happens with changing vocalists and a laid-back vibe. Or the strum of the ukelele and a Caitlin Rose cover. Or the flautist. Or the electric guitar and the blues growl. All of it magic of its own kind.

And even when the crowd are shushed it is with respect not annoyance, it’s as much not wanting anyone to miss out on the music being made as needing to hear it for yourself.

You do need to hear it for yourself.

Everyone needs to find themselves drawn down those steps into the other world of Ruby Tuesdays, to know beyond doubt what the love of music feels like when it is all around you, to believe in magic.

Ruby Tuesdays is at Sotano, Little Stonegate, York every Tuesday from 9pm until late. It’s free, there are drinks offer and all are welcome. Chris has some rather lovely badges (even if we do say so ourself) to give out if you wanna take a piece of magic away with you.  Follow Ruby Tuesdays on Twitter and Facebook.